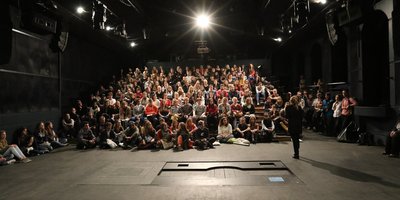 The Master`s programme in Theory and Criticism - following up on the Bachelor`s programme - addresses mainly: 1. the current state of the art, through its tendencies and transformations rather than through its history; 2. through creative processes rather than through results. In this regard, the programme`s anchoring in the Theatre Faculty is of fundamental importance, because its methodology is based, among other things, on meetings with practicing artistic personalities throughout the programme.
The Master`s programme in the field of Theory and Criticism is focused on developing and deepening the knowledge, skills and competencies of graduates of the Bachelor`s programme in Theory and Criticism or related fields, such as dramaturgy, theatre studies, aesthetics, modern philology, etc. First and foremost, of course, the programme follows up on previous studies in theatre as a special kind of art (in particular in its contemporary forms and transformations), but it also places theatre in broader artistic and societal contexts, i.e. with a certain amount of overlap in particular with literature, film, media, as well as philosophy, anthropology and general theory of art. Compulsory in the programme are subjects which realise the field`s basic circumscription to theory and criticism. The backbone subjects include in particular the four-semester course Contemporary Theory of Theatre, supplemented by the more general course Artistic Criticism and Theory of Artistic Criticism, and a course on the history of world theatrical criticism called Development and Transformations of Theatrical Criticism. In addition to these subjects, the required curriculum of the Master`s programme also places emphasis on students` independent work connected with thematically targeted research and edified work with scholarly texts - their own as well as extant ones (this concerns in particular the subjects Principles and Approaches of Theatrological Research and Analysis and Interpretation of Scholarly Texts). A major component of the study plan and at the same time a creative output is the conception and realisation of a scholarly theatrical magazine as part of the four-semester subject Critical Practice I and II. The magazine should express argued generational opinions and postures, and also address in essay form wider questions transcending the borders of theatrical arts and touching on more general issues of contemporary culture and society. Within the scope of required elective subjects offered with a periodicity of 2-3 years, students encounter core departmental faculty members as well as other personalities in the areas of public affairs commentary, cultural studies, dramaturgy and philosophy who lead them to contemplate theatre in wider contexts; the work of experts from practice is completely fundamental for the programme, because it supports the continuous innovation of instruction based on the development and transformations of the professional environment.

The programme cultivates creative experts capable of reflecting on contemporary theatrical art in wider cultural and societal contexts. Graduates work in professions immediately connected with theatrical creation and critical reflection on it, as well as in cultural administration, cultural policy institutions, in the media, in public affairs commentary, in editorial and agency work, and in education (examples of careers: art critic, expert editor, dramaturge, dramaturgy lecturer, researcher, pedagogue, employee in the area of cultural policy, etc.).