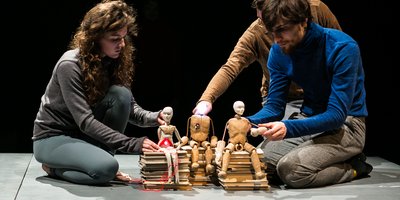 Acting of Alternative and Puppet Theatre

Acting of Alternative and Puppet Theatre is a programme focused on preparation for theatrical practice. In initial years of the programme, students become familiar with the processes of contemporary puppet, dramatic and in particular authorial theatre, with an accent on current trends in world theatre. Emphasis is placed on metaphorical expression and personal predication, on working with objects and puppets, and on physical and musical theatre with an accent on the interaction between the individual components of a theatrical work.

In subsequent years, the programme in acting develops the student as an independent and distinctive creative personality working in an ever-expanding space of theatrical activities. The concept of acting is understood in this case in wider but also more specialised contexts. The programme thus also encompasses the social functions of theatre and interactive contexts with related artistic fields. At the same time, it also opens new spaces for acting, such as site-specific projects, new circus, performance, theatre of new technologies, theatre of objects, etc. The goal is thus to cultivate a personality which will discover new possibilities of theatrical creation or interpret it at the highest professional level with emphasis on innovative and novel approaches.

A graduate obtains the basic knowledge and skills in order to be capable in practice not only of working professionally in the field, but also of engaging in independent creative activity. He/she is oriented in the history of the field, and is equipped in the areas of voice and movement, as well as in working with objects and puppets. He/she has experience will collective staging work. The programme emphasises the creative, psychosomatic and epistemic realms in such a way so that the graduate is capable of independently choosing the subsequent direction of his/her artistic activity in the new contemporary trends of theatre, for example performance, improvisation, authorial theatre, puppet and object theatre, street art, new circus, etc.
After graduating, he/she should be capable of doing independent creative work, initiating new projects and becoming involved in existing projects while making a significant personal creative contribution. A graduate should also be capable of appropriate reflection and analysis of his/her own work and of integrating it into the wider context of theatrical creation.